Posted at 18:20h in Drew's Blog by Drew Gregory 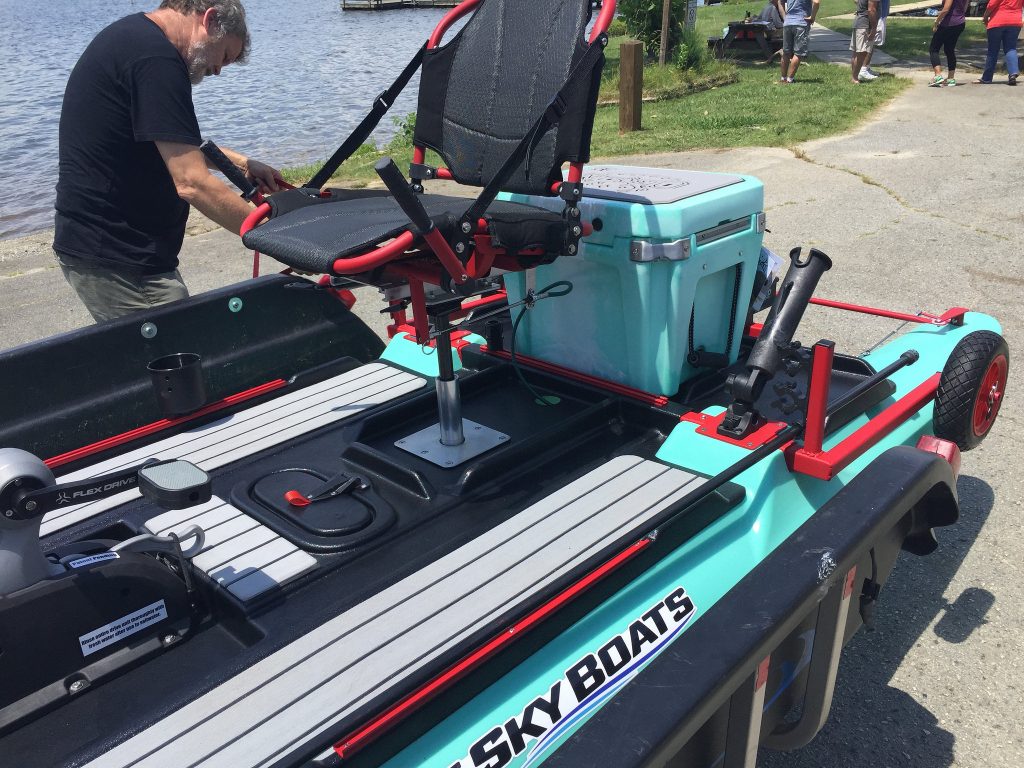 Not much is known about this new watercraft yet, and since I’ve been fortunate to be one of the few to have seen and test pedaled it, I wanted to write up my initial thoughts.

When I first saw this thing, I’ll have to admit, it looked foreign, especially to freshwater anglers. Of course, not too long ago, a kayak was defined as a watercraft that one sat inside of, and used a double-bladed paddle to propel. And the concept of fishing out of a kayak also seemed foreign to most out there. Obviously things have changed! So, I went into the concept with an open mind. What I tested was a prototype that we’re still tweaking, but in my opinion, it was already a very polished and functional watercraft. Watercraft is a great word for it, because it can’t be put into just one box; it is very much a cross between a kayak, mini skiff or small catamaran. You can pedal it, paddle it, push pole it, or add a motor to it. To me, this is what truly makes this hybrid catamaran style kayak special – YOU, yes you, get to use it as you see fit, based on your fishing needs, the water type you’re fishing or the species you’re targeting. Versatile. For now, I’ll just call it a Cat-a-yak, or maybe Cat-Yak? Still undecided, but either way, it’s a watercraft I’m definitely going to be using alot this coming year, and here’s why. 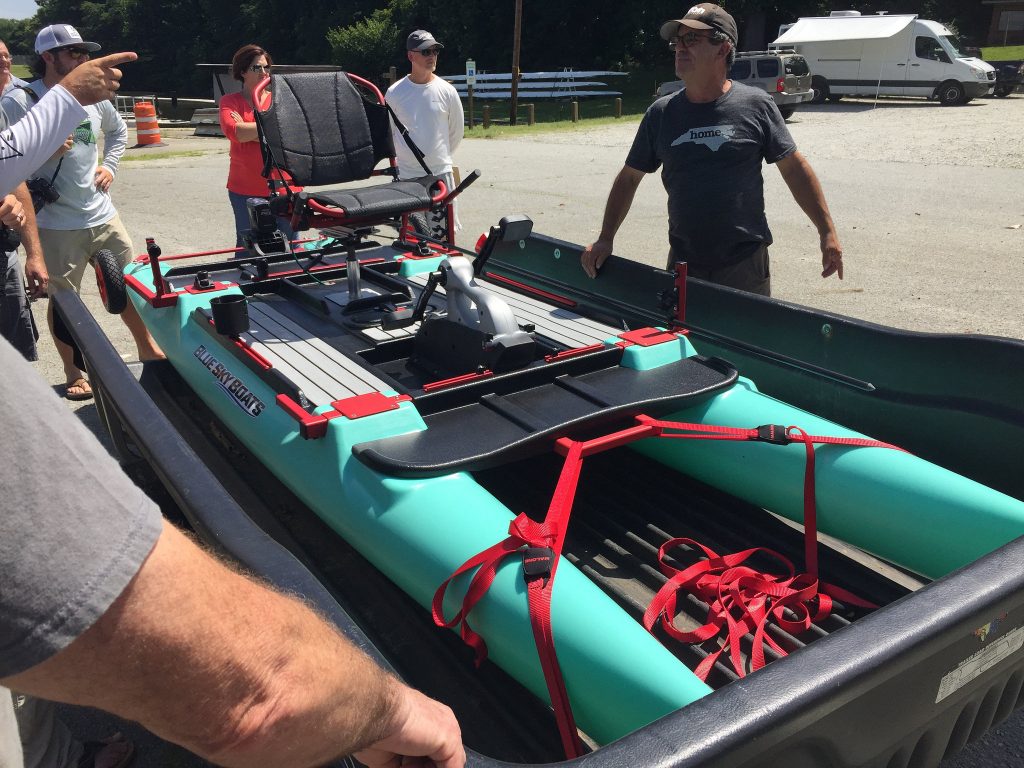 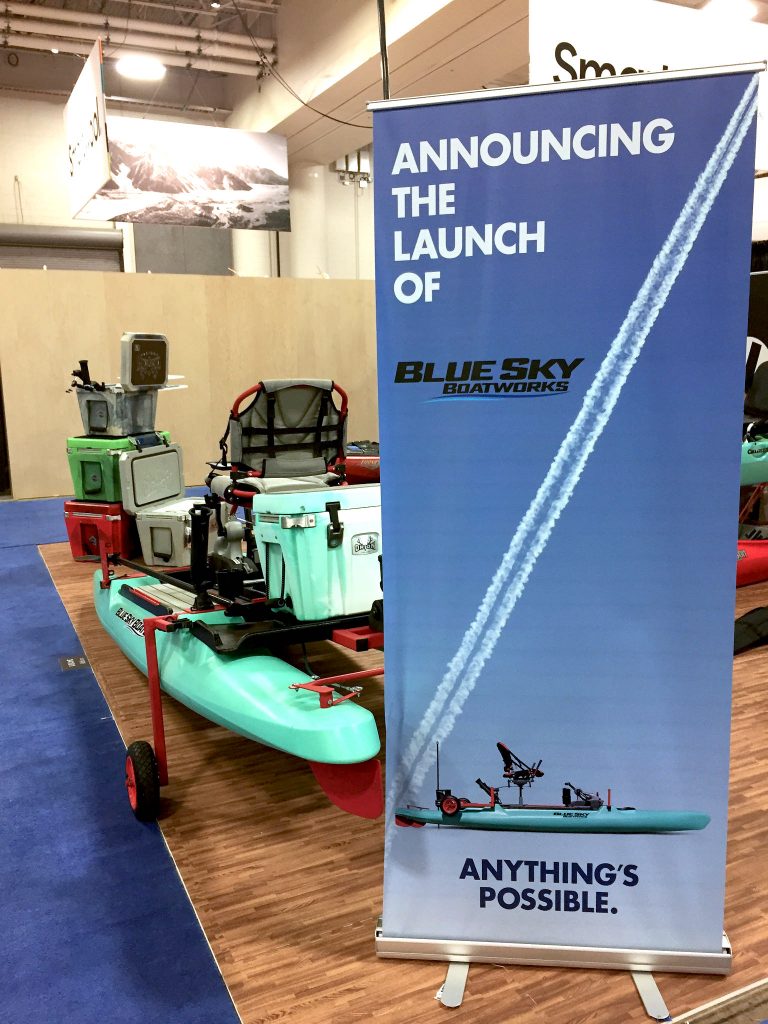 Right off the bat you notice that it is a decent sized watercraft that can handle someone of any size. Usually those watercraft are on the heavier and slower side of things, but due to the catamaran-style design, this cat-a-yak is actually much lighter weight than kayaks or other small boats in its same size range. Combine that with the fact that you can actually take this craft apart, (if you wanted to lighten it’s transport weight even further), and I was impressed. I believewhen taken apart (which was very easy and takes just a few minutes) the heaviest single piece was only around 30 to 40lbs. The outriggers help make the boat super fast because less boat (friction/surface area) is touching the water. I said, “Wait, so you’re telling me this thing is much lighter than the extra large sized kayaks that are in vogue right now, and somehow is also much faster than other small boats or kayaks in that size rage, and more stable?” This seemed almost too good to be true, and I probably wouldn’t have believed it if I hadn’t taken it for a spin myself. 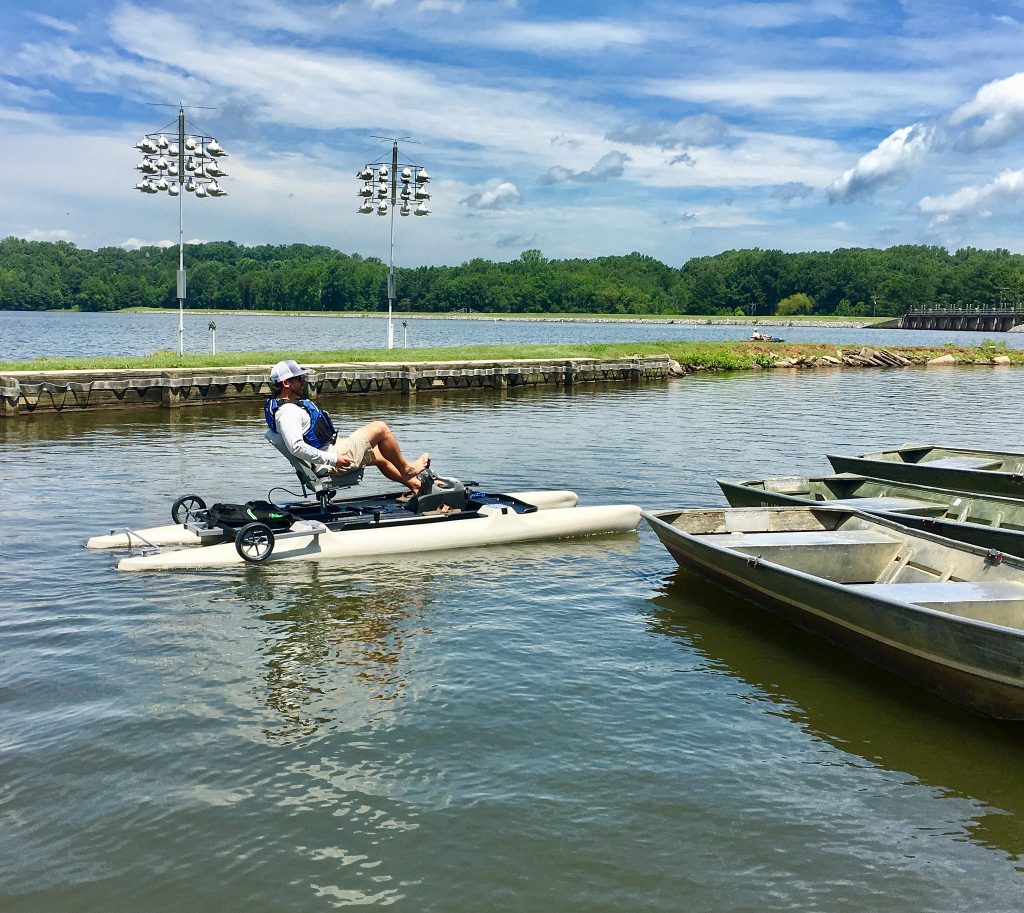 WhenI got on it, it was its insanely stable; you can literally walk anywhere you want on its deck. I don’t mean it is “possible” to stand anywhere on its deck in a “gimmicky” marketing photo sort of way that angler’s would never actually utilize. No, I mean you will literally stand up from the seat (when facing any 360 degree direction) on the deck and fish from it, or even walk around on it if you choose! Hence the name 360 Angler. In fact, unlike most traditional fishing kayaks you can easily walk onto this watercraft from a dock. The pole mounted swivel seat sits higher than any kayak seat out there, and it allows you to fish/face in a 360 degree radius, which means if the fish surface behind you, you can swivel the seat to make the cast. In a traditional kayak, even when standing, you’re true fishing/casting radius is about 180 degrees, which means directly to your right, your left and of course anything in front of you. It is very difficult for most people to stand and fish too far behind them, and even those that can don’t always get the same accuracy because your feet are basically always facing forward when standing in a traditional fishing kayak. The only way to quickly cast anywhere behind you in a kayak would be to turn it and then make the cast. 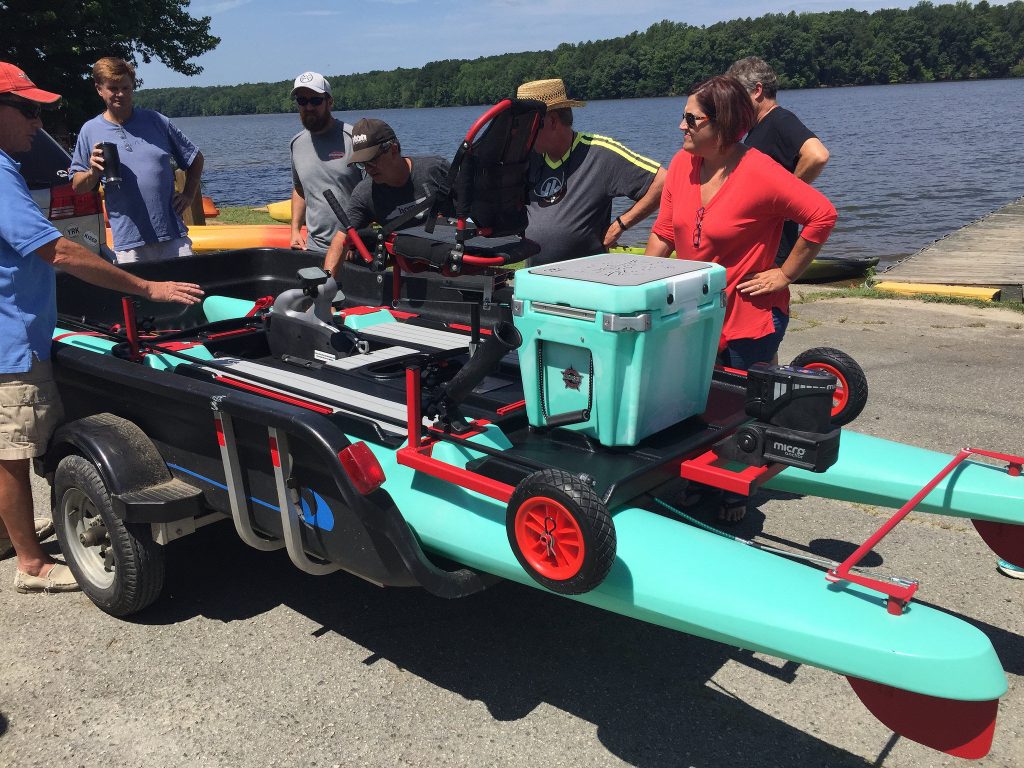 A few other very cool features that this cat-a-yak boasts, that truly make it unique, would be that it comes with its own wheels for easy transport right off of your truck, trailer or SUV. I also loved the fact that it does have a front porch and back porch to it that you can walk out on, bring along your four legged friend, or put your Orion Cooler on as seen in these photos. This is nice because sometimes if I Power-Pole down to fish some structure, I may want to change my positioning for flipping, pitching or just casting in a slightly different direction. I don’t have to move my entire watercraft, but rather just walk forward or turn a little to get the angle I may need. The open deck just feels nice, and yet there are still boat features that assist with tackle storage, rod storage or mounting accessories like a fish finder, GoPro or whatever you may need while on the water. 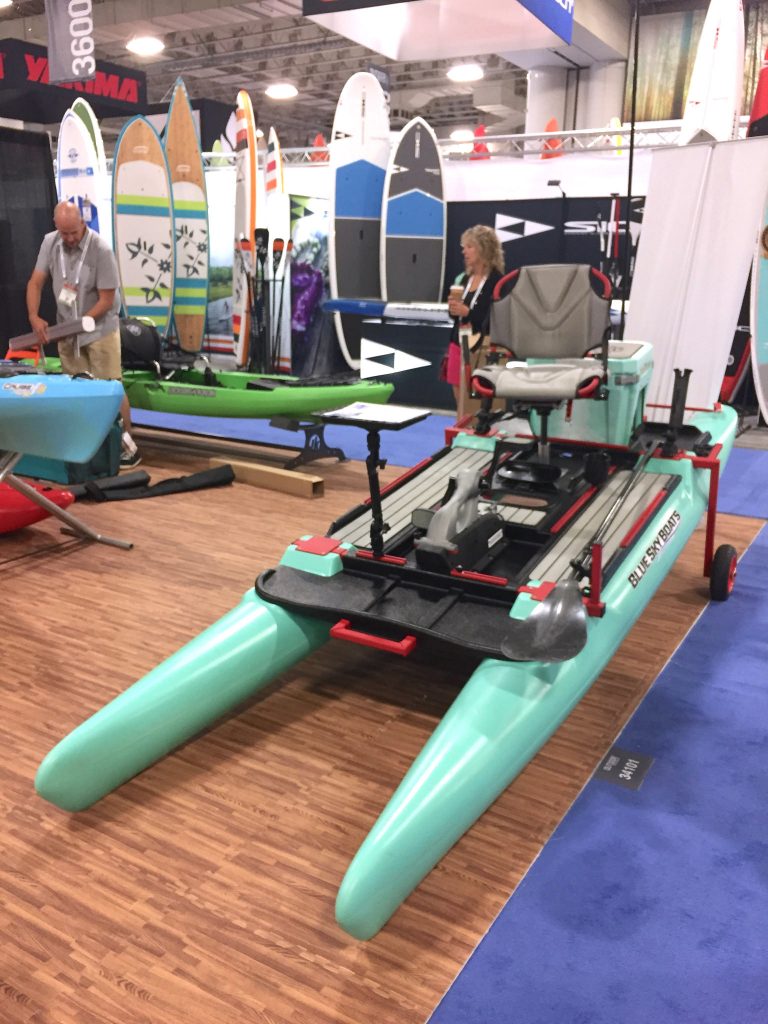 If you’re a big game angler, it doesn’t get any better than the amount of stability and space on the deck to bring in a HUGE catch! If you happen to be an inshore angler, I loved the idea of adding a poling platform onto this craft (one of the first add-ons I hope we make for this thing). It is plenty stable enough for one as high as 30+ inches, in my opinion. I once put a poling platform on my Jackson SUPerFISHal, sight fished and caught redfish and permit from it, so surely this thing at 45+ inches (final specs TBD) will be absolutely ideal for it. The SUPerFISHal is around 34 inches, for comparison. For the fly angler, it is just yet another wide and stable platform to fly fish from. Obviously a stripping basket or some modification would be needed so that the line doesn’t tangle up on any of the boat’s features, but you get the idea. Obviously if you’re predominantly a bass angler like myself, you can probably already tell what this sort of comfort, extra height, stability and performance can mean for your chances of landing your next lunker! 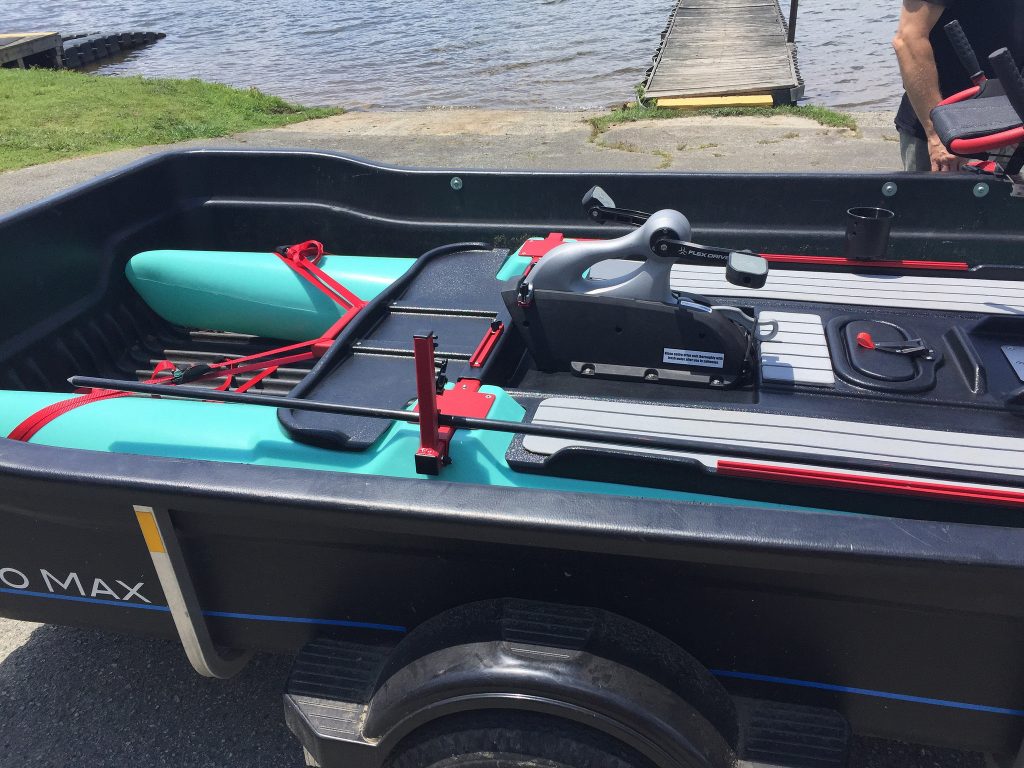 I honestly couldn’t find many “cons” to this new type of catamaran kayak. Maybe the “look” is one of it’s biggest cons, just because it is so different than anything I’ve seen before, especially to freshwater bass anglers. Catamarans are more common in saltwater or sailing, so it may not be as foreign to salt anglers. However, I don’t care how it looks, as I’m sure most fisherman don’t either, but rather how it performs. That is ultimately what fisherman are all about – the performance, which is all about being the best tool to get the job done. At the end of my test, I just couldn’t think of any negatives to this thing. It’s faster, more stable and lighter weight than anything in its size class. Maybe it’s overall size could be a deterrent for some, but with how light it is, has wheels, and the fact that it can taken apart to lighten it up even more for transport or storage makes it feasible for a person of any size. My wife even pedaled it and fell in love with it to the point where she wants one (“very much” she just added as I am having her proofread this for me! ha!). It fits in the back of pretty much every truck, although might ride over the wheel well in some, but that’s not a big deal. As you can tell, I’m kind of grasping for straws trying to find a negative to this craft, and I was honestly very skeptical going into this whole concept. You’ll just have to try it for yourself to believe what I already know about this watercraft.

We’re still 6 months away from production and a lot of tweaks are still to be made, dealers need to be signed up and many questions are still to be answered in terms of what is included in the production model and its final specs/price. Based on what I’ve been told from the team, it is going to be around 13 ft long and the width will be in the mid 40s (inches), give or take. The MSRP should end up somewhere in the mid $3000 range as well.

Hopefully this helps enlighten many of you out there who have been hearing about this new funky looking thing by Blue Sky Boatworks (by Jackson Kayak).