Posted at 21:03h in Drew's Blog by Drew Gregory 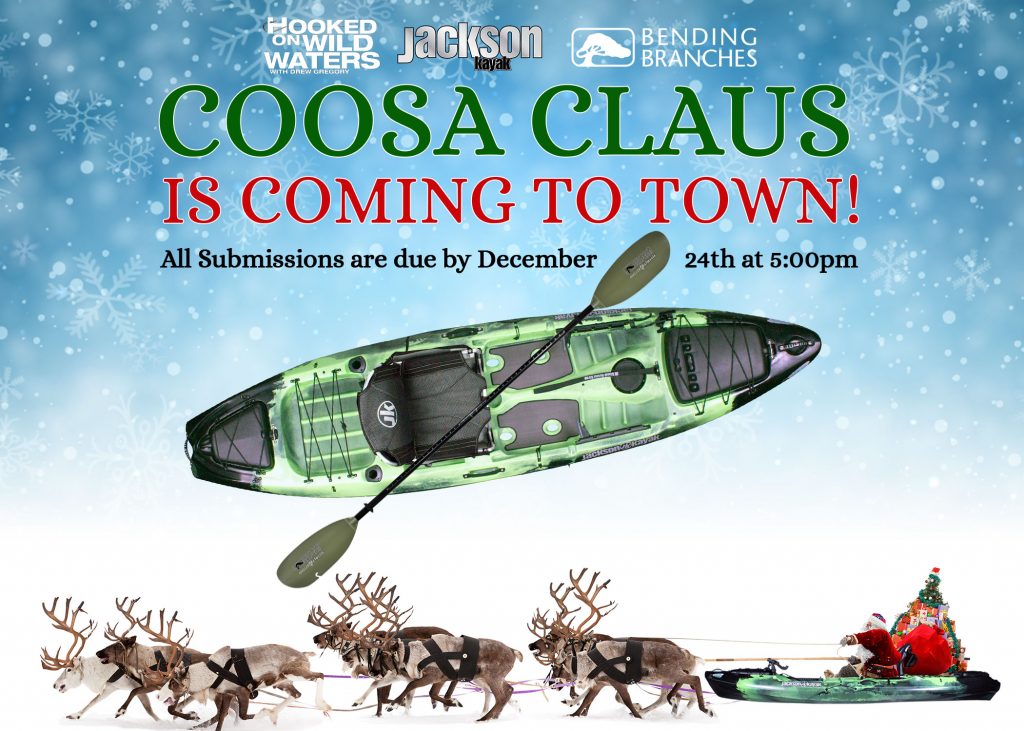 Before I get into the details behind Coosa Claus and how you can nominate someone in need to be the recipient of a new Jackson Kayak Coosa kayak, and Bending Branches paddle, please read the story below to learn more about the reasoning behind it.

It’s been a fun, but tough year on the Hooked on Wild Waters front; not unlike so many of you out there, I’m sure. However, it hasn’t necessarily been tough due to a lot of bad things happening, although we’ve had our fair share, but its been tough due some great changes, such as the birth of our son Theo. He arrived a month early and has had quite a few time consuming checkups, appointments and costly care that have kept my wife and me very busy. We certainly can’t complain; we were blessed with a happy little boy, and even though he’s had some issues from being a preemie, we’re fortunate compared to so many out there that have experienced far worse. Recently, I was working on making calls to insurance regarding some of Theo’s medical bills. I was a little stressed because, as we all know, insurance doesn’t like to pay if they can find any clause or reason to justify not paying. I don’t get too down very often, but on this day, I was down; to top it off, this was taking up time that I needed to be spending on some work projects and house projects that have been piling up since the hurricanes hit our area! Then, the straw that broke the camel’s back was when we saw mouse droppings in our house for the first time! Ughh, it just felt like I was never going to get out of this hole!

At this point, I had to take a step back and reflect on what God wanted to teach me through this rough patch. The thought that came to my mind was to do the opposite of what all my natural instincts felt I should be doing. As I was in the midst of feeling very squeezed and having a lot taken from me, I decided what to do – give. I needed to find a way to be a part of helping someone else get through some of their tough times, because somehow I always feel better when I find a way to help others. When I do this, I gain perspective; my problem always seems to works itself out, or it doesn’t seem to be as big as it once was.

Being early December, I thought about how the idea of bringing “Coosa Claus” back has been crossing my mind a lot lately. This is something we did almost 5 years ago, where we gave a Coosa to a person in need, to lift their spirits and to make their Christmas extra special. Then for a moment, I almost talked myself out of it with a brief thought of, “Well, I’m too busy this year, but one day when we really get ahead of things and don’t have “this” or “that” going on, I’ll do it.” Of course, you know when you say something like that, the thing that you’re trying to push off is never going to happen! So, I decided that amidst a tough time, I must make time to make this a priority, because someone out there is going through a tougher time and could use a little hope again.

I feel that many of us, including myself, often look at individuals who are extremely wealthy and publicly give hundreds of thousands of dollars and we say to ourselves, “Well, yeah, one day if I’m a millionaire, I’ll be able to do more and give more like those guys, too…” However, I know it just doesn’t work like that, and you probably know it, too. Either you care about others and make time to give now, when you may not have as much, or you likely never will.

Since Jesus is the reason for this season, my situation reminded me of a story He described best, in the parable of the widow’s mite. If you’re not familiar, Jesus watched as the rich were contributing large sums of money, but then along came a widow with two small coins in her hand. One Bible version calls them “two small copper coins, which make a penny” Another version calls the coins “mites.” But, the point is, these were the smallest denomination of coins. The widow put her coins into the box, and Jesus called His disciples to Him and pointed out her action: “Truly I tell you, this poor widow has put more into the treasury than all the others. They all gave out of their wealth; but she, out of her poverty, put in everything—all she had to live on.”

Although a Coosa isn’t the last asset my family owns, this is ultimately the basis for Coosa Claus. The point is, no matter my circumstance, I’m committed to find a way to team up with my partners to give a Coosa to a man, woman or child whose Christmas may need something special like this. All I need from you is to send in a name and a brief story explaining that person’s circumstances; why you feel they may be in need of a gift like this. Send in your nominee via the form below to help me figure out whose spirits we can lift this year with this awesome kayak fishing gift. They’ll also receive a Bending Branches paddle, thanks to all the good folks at Bending Branches. *UPDATE 12/11* Yak Attack is also donating a $100 gift card. If any other sponsors, or even “non-sponsors” of mine, hear about this and want to donate, we’ll be happy to accept anything to help grow the Coosa Claus package. Or, if we get enough donations, we may be able to give gifts to multiple people that could use some Christmas Cheer! Let’s decide to give this year.

Nominate someone via the form below, and thanks for being a part of this year’s Coosa Claus!